The Dragon Scorpio (Police/Local governments/FBI/CIA) will force a full restructure to renew security through the transformation energies established in order of the universe right after Boston Marathon Bombings. Tsarnaev traveled to Russia for six months and returned in July 2012. The new “Chechen terrorists” got ‘hypnotized’ by those extremist group, to arrange the attacks to target at Boston Marathon. This Tsarnaev family originally hailed from the Russian republic of Chechnya and fled from the brutal wars in the 1990s. Russia was the part of the state that borders with Chechnya. Understanding, this country wasn’t built on “terrorism.” This country separated itself from a tyrannical government using military tactics against military personnel, but still  so many terrorists network and threats occurred  from the Chechen terrorists all over in the middle east region, it became armed and dangerous through their deadly religious practice. Those Chechen got linked and made their way to Boston.

Keep in mind, they’ve been here for 10 yrs, they grew up in U.S. like any American kids. Two Tsaranev brothers were once innocent children in this free country. Unfortunately, as a result with the Planet Neptune with religious mind poisoning that deceived them by setting  up the brothers to turn into revengeful, especially his older brother who brainwashed his young brother to follow his wishes. 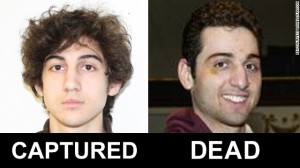 (CNN) — Boston bombing suspect Tamerlan Tsarnaev appears to have posted and then removed a video of a jihadist leader who was later killed by Russian troops.

For centuries, three major religions have been at the core of hatred, bigotry and killing going on in this world: Christianity, Islam and Judaism. For over a 1000 years, they’ve fought and killed each other in crusades, inquisitions, massacres, invasions, exterminations, jihads, holy wars, burnings, witch hunts and beheading. Even today with  prejudices in vain, as instance, Christians hate Jews, Jews hate Muslims, Muslims hate Christians, Christians hate Muslims, Protestants hate Catholics, Shiites hate Sunnis, Muslims hate Coptics, it goes on and on. All these three major religions teach the same self-righteous: ‘That our God is the only true God; that our beliefs are the only truth; and that the others’ Gods are false’. Sadly, these religions sprung from the same cosmic source code.  To have awareness with astrological cosmic knowledge is the key to have self-recognition, to understand the strength and weakness within and in others , and at the same time, to teach love, forgiveness, tolerance, kindness and peace.  The stars or twelve signs of zodiac all started where needs to have a relationship with Divine and the Universe for an awakening soul purpose, instead of engaging in hatred, revenge, intolerance, and war all due to controlling religions written by men. The world would be in a much better, civilized place if these major three religions had never existed.

As always, there are hundreds of questions, and those questions need to be answered to explain why those two young men had done this, and this terrorist attack could have been blocked. Let’s investigate with both of the brothers to find answers to those questions….

He was born with Sun in Libra, was deeply religious of sacrifice where the Jupiter was positioned in the constellation of Pisces, religious mind poisoning within 6th house of service( work and health). He primarily serves his religious practice with a sacrifice purpose. Jupiter rules the foreign lands and religions that related to his  travel to Chechnya, of course, his Natal Sun and Dragon Tail (negative) in Libra(partner/law)  was seeking a new relationship with or attract to those Chechen rebels who are the fiercest jihad warriors(Pisces energies). With his Mercury in Scorpio attracts the hidden life through the hidden underlying of reality and desire to revenge.

With the planet mars rules the cardinal energies in his rebel sign in Aquarius. He had unleashed his beast to act out, to do anything for his deadly religious as a sacrifice.  his warrior within(Mars in Aquarius) released its dark forces(Pluto in Scorpio generation) to attack with bombs in Boston marathon.

He was born with Sun in Cancer, intensely in need to be close with his brother Tamerlan. Cancer rules home, family, security and protection,  but his natal Sun is in opposite direction to the Planet of Illusion-Neptune, in 7th house of relationship, contract and marriage where he became criminal partner with his own brother. Worse, Neptune rules illusion, deception and religion. Also he shared the same deadly dark force of the same ‘Death Wish” generation (Pluto in Scorpio).

Now, this is no accident for continuous discussion about what’s going on with Russia government with unclear explanation about why the FBI had suddenly drop the investigation case of Tamerlan with the limited info, according to  U.S. official and the law enforcement source. Sean Collier, the Massachusetts Institute of Technology campus cop who was shot to death by the suspected Boston Marathon bombing due  to nasty deadly energies going on under the stars. Note, Russia, Cop, FBI are controlled by Scorpio energy. (Russia is also Scorpio country)