Misspelled Pope coins caused by Mercury Retrograde. Yes the planet Mercury of Communication indeed screw it up.There is no accident for those mercury consequences in printed words that would mess under Mercury Retrograde. Would the Preachers of LA follow the stars like the Three Wise Men who followed the stars that aligned towards the birth of Jesus two thousands years ago? Nope, those Christianity religions still don’t support the cosmic wisdom of astrology education, the unseen cosmic force that too exist in their world, not realizing the chaos in the effect of the universe energies that need to gain this valuable, advanced cosmic knowledge

But Mercury Retrograde is a good chance for you to redo, catch up, which means to go backwards whatever unfinished business you have left behind. You can re-evaluate with in your life where you have been and where you are at today. It can also screw up your plans, technical equipments, electronics, and the travel mishaps such as trapped and lost in heavy traffic like the  Airline loses greyhound at airport. 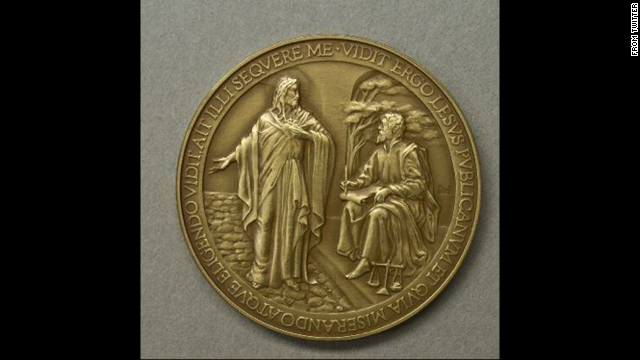 (CNN) – For the love of “Lesus,” the Vatican needs a copy editor – preferably an infallible one. In honor of the first year of Pope Francis’ papacy, the Vatican issued a commemorative medal Tuesday. The coin-size medals are sold in Vatican City and usually provide a steady stream of revenue for the church. Just one problem: The Vatican misspelled the name of Jesus on the medal.

Self-centered clueless preachers who don’t know much about Mercury retrograde, the Moon phases and the entire energetic stars written in the universe, NOT the written rules. All they can do is sing sing sing sing and talk about Rolexes, Mercedes, gold chains and lifestyles. All of that fund came from the regular people of an audience that make them rich. They themselves behave as gods as celebrities to be worshiped. Many church leaders are just as clueless. Note I don’t subscribe to any organized religion. They are just like captialism corporations. You can’t buy a stairway to Heaven. You can learn and grow in spirit on earth in benefit with the stars educate us for free unless you shall ask and receive the light via stars without feeling fear.

The planet Neptune rules dream, deceive, illusion  and LA LA land, even psychical religious poisoning to themselves, but living the God’s Cosmic Life teaches us in many things to learn about ourselves, including Preachers of LA themselves about what it means to be human being with individual definitions. Personalities, lifestyle choices, attitudes, and all are directly revealed  to his/her own natal chart.

Now back to mercury retrograde, without a divine revelation, to prepare us for life in the planet of Mercury energy on the consequences with your freedom and power that would be lost. Cosmic education is part of that revelation. It is the communication of knowledge to man from beyond the physical realm, known by science  Preachers of LA are manifest of unskilled laborer totally unaware of the stars and the cycle of heaven- Cosmic Forces, but into religious deceptive archaic teachings that would not help the world better.

Mercury Retrograde forces me to remind you again, Let’s go back to the historic timeline…Note, two thousand years ago, these ancient wise men or the “Magi” did follow the stars in the desert to Bethlehem to discover where the stars aligned directly to the birth of Jesus. These wise Men knew the significances of the stars. those certains stars appeared at the moment of Jesus’ birth, and was visible to the wise men. Thus, the question is were they the Kings or Astrologers? Ironically, the Bible says, don’t follow the stars? Religions have removed Astrology out of the context, not wanting the public to know and keep them more power in that time. The plain truth is obviously only if you “Ask you shall receive”. Knowledge in Astrology is the answer.

You have to remember when you lead a horse to drink a bucket of water-cosmic water, yet can’t force it to drink, only its up to the horse. Will you drink to gain knowledge? The choice is yours. Astrology do give definite celestial answers.