The stars are the elixir(medicinal purposes) of life! Great spirits have always encountered opposition from mediocre minds. The mediocre mind is incapable of understanding the man who refuses to bow blindly to conventional prejudices and chooses instead to express his opinions courageously and honestly.’- Albert Einstein

Do not confuse Astrology and Astronomy. Don’t let Astronomer speak for you. Like NASA, current Astronomers, Astrophysicists and Cosmologist both cosmic non consciousness and never understand or study the star divination but sees the stars as dead rocks (spiritless) and consider it a pseudoscience. Do not expect from them to do much good for humanity from their incredible answers.

Astronomers will tell you all about how the movement of the stars, position in the solar system, size, color, motion of the planets, composition, supernovae explosions, gamma ray bursts, and evolution of celestial objects. This is a subject focus on physical cosmology, is concerned with “dark matter” studying the universe as a whole.

Astrologers will tell you all about how the direct relationship of the human psyche to its interaction with Universal Mind or God’s cosmic divinity (solar system) including explain aspects of a person’s cosmic personality and predict future events in their life based on the positions of the sun, moon, and Dragon Head / Tail resides at the time of their birth. 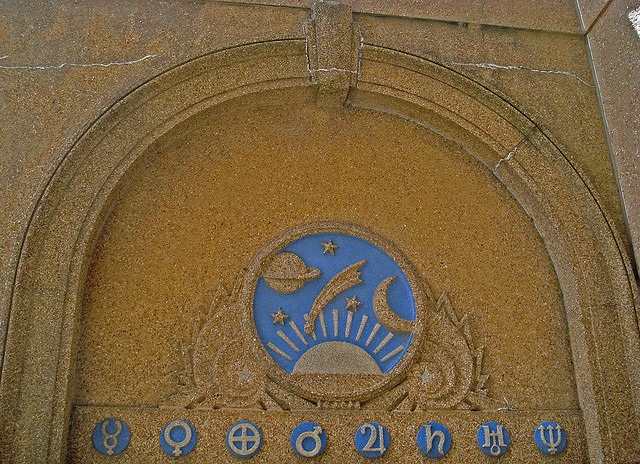 The planets at Nicholson Hall at Louisiana State University (home of the school’s astronomy department and the Landolt Astronomical Observatory)…So now you see the artworks of Astrological Symbols (or glyphs) indeed belong to Science of Astrology, not Astronomy. Yes, it’s stolen their artworks. My question is Why it put on the wall at the Landolt Astronomical Observatory and know nothing about astrological values? Think about it….

Indeed History of Astronomy must acknowledge / recognized that Astronomy is a by product of a much older “pseudo-science” called Astrology. It’s only translate the universal hieroglyphs with all the wisdom in the past (disappeared civilizations knew how) to communicating, pay attention to; take notice of God’s cosmic sign that identified celestial objects with gods, spirits and divine. They related these objects (and their movements) to

phenomena such as rain,drought, seasons, and tides. It is mostly confirmed that the first “professional” astrologers were priests, and that their understanding of the “heavens” was seen as “divine”, hence lost wisdom of all the wise man’s ancient connections to what is now called astrology.

Sad enough, All the current scientists, skeptics, astronomers, astrophysicists are a cosmic non consciousness. They are more concerned on Mars ridiculous missions than focus here on the earth where the cop killings dramatics results are quite depressing, with the chaos experienced on on many circumstances. Even more dramatic increase in racism, sexism,

homophobia, Islamophobia, online hate speech, sexual assault cannot yet solve it by “educated” scientists who depend on atheism and financial support to survive or save their face! Realized that children must reconnect with essence of God’s divine nature to add to a science who lost the spiritual essence. It bring us more spiritual regeneration and

more rebuilding self-esteem. By learning Nostradamus’s Divine Astrology or Astropsychology, every child should have a chance to learn his ancient practice that lead to finally reconnect the cosmic truth (God Cosmic Divinity / Divine Cosmos / Soul of the Cosmos / God’s Divine Nature ) It’s must to restore to a whole again in our college

and universities in order to learn more about essence of God’s divine nature in the stars, but Hard core, old fashioned, mathematically oriented modern astrologer may not be able to enter the power of visionary / prophecy / intuition but more focus on the details such as risings, aspects, deal with numbers, trines, sextile, degrees, solar return, saturn returns but

Superconscious in time and space. Keep in mind, Astrology is an art, visionary, creativity, prophecy and power of intuition which it allow us to translate the universal hieroglyphs through the communicating, pay attention to; take notice of God’s cosmic sign. You must born with extremely advanced cosmic identify are set to naturally communication with the universe with the spirit.