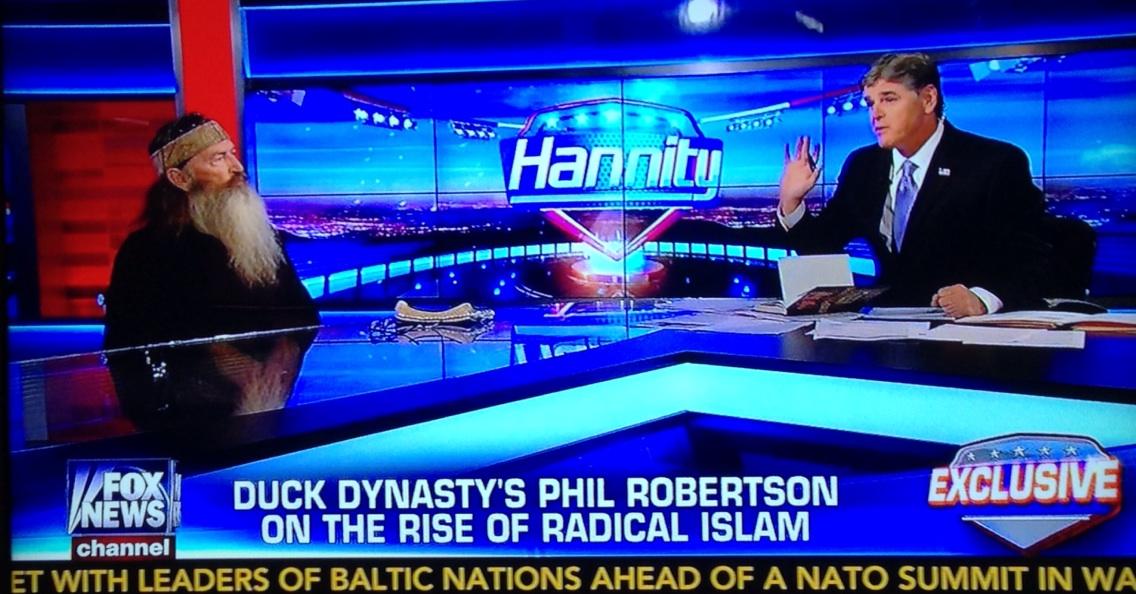 “Duck Dynasty” patriarch Phil Robertson offered his thoughts on the Islamic State on ‘Hannity’ Tuesday night. Robertson explained how he would fight the insurgent extremist group ISIS. “Either convert them or kill them,” he said.

Phil on ISIS “convert them or kill them” is not making difference but “doing the same thing over and over again and expecting different results” for two thousands years old religious war. Sadly people don’t understand the very same fundamental difference between Islam and Christian Ideology as a dominant power over that nation but doctrine of hatred and bloodshed.

Just like another right wing Christians‘ Duck Dynasty’ Star Phil Robertson, Pope Francis, Joel Osteen, Pat Robertson, Benny Hinn, Rush Limbaugh and Glenn Beck are cosmic unconscious born underdeveloped dysfunctional Neptune aspects in their natal chart is manifested unable to read the signs above the heaven. They are totally deceptiveness of false teachers as result of the world is in chaos in the vacuum of deceptiveness of religious experience.

How can Islam and Christian Ideology become to “one cosmic UNIversal religious” as peace, love and harmony? UNI -a combining form occurring in loanwords from Latin ( universe), used, with the meaning “one,” in the formation of compound words ( unicycle).

Those are non cosmic conscious born bible head really missed Jesus’s cosmic message…“There shall be signs in the sun, the moon, and the stars.” – Jesus Christ, Luke 21:25.  His introducing to all humanity to very real God “Our father in the Heavens” or God’s celestial divinity where the teachings of the 3 wise men / Magi come from out of the East  (from Persia) to find and worship the baby Christ, would be called “astrologers”.

It says God created the stars / heavenly bodies to show us “signs” of His intentions, and those signs are there for anyone to read, if they would only learn how to interpret them. This is “the hand of God” at work. so now Phil Robertson offered his thoughts on the Islamic State is totally wrong approach in Live television is really embarrassed and shame. “Because they are seeing, they see not; and hearing, they hear not; neither do they under*stand” the voice of heaven.” – Matthew 13:13

In this image, that right wing Christians are just a radical and blood thirsty as ISIS therefore this is man-made religious at work!

Phil Alexander Robertson (born April 24, 1946) is ‘Duck Dynasty’ Star. Here is my interpret to help you to understand where he come from and explaining why he talk act like this. He born in April, under the constellation of Aries with his SUN sign in Taurus.

In Astrology, the planet Mars rules our animal instincts for aggression, anger, and impatience. This male Aries is the masculine energy with stubborn Taurus is a perfect descriptive how he talk act like “convert them or kill them”.

What’s worse, ‘Duck Dynasty’ Star Phil Robertson born with a Sagittarius (codification of thoughts/books) on his Dragon’s Tail he is a religious fanatic born bible head to preach the people. Sagittarius is manifested reincarnation from the middle east in his past lifetime to preach the two thousands years old doctrine and now FoxNews is a sending wrong message and pass on their own deceptiveness messages as result of doing the same thing to accomplish their finance or power. This article is my contribution to all people willing explore the hidden truth while developing their own cosmic consciousness.

“Man is superior to the stars if he lives in the power of superior wisdom. Such a person being the master over heaven and earth by means of his will is a magus and magic is not sorcery but supreme wisdom”—Paracelsus