Knowing what to do during a fire, this robot has to first walk there and traversing all obstacles and bulkhead door autonomously. In addition, it will be able to interact with humans as part of a wider firefighting team. Uranus’s manifestation that the trained fire responder who is directing/babysitting this thing would be better utilized fighting the fire more directly. Uranus-The Genius’s problem being solved here is “finding a use case for a robot fighting a fire” rather than “what is the best way to fight a fire”. 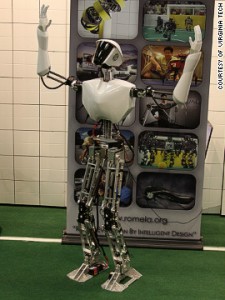 (CNN) — It might look like science fiction but the U.S. Naval Research Laboratory (NRL) hopes to turn this humanoid robot into a seafaring fact in an effort to improve firefighting capabilities on board military vessels

This is ‘promise of something new’ of Uranus’s manifestation is now pushing more technology and inventions toward to military vessels. Uranus in Aries creates technology change by clearing out the old so that something new technology! Aries rules natural born leaders and fire sign that into the oceanic world and finding a use case for a robot fighting a fire. Note currently universal transiting, Uranus(inventions) in Aries(military) is now interact with Neptune(ships) in Pisces(ocean/water). Neptune rules the oceans and seas and all large bodies of water. Neptune also rules the sign Pisces, fishes, and marine life in general. Uranus is now produced for Neptune’s World(military vessels) and Autonomous robot will launch firefighting grenades and interact with human firefighters. That’s how they currently interact with each other.