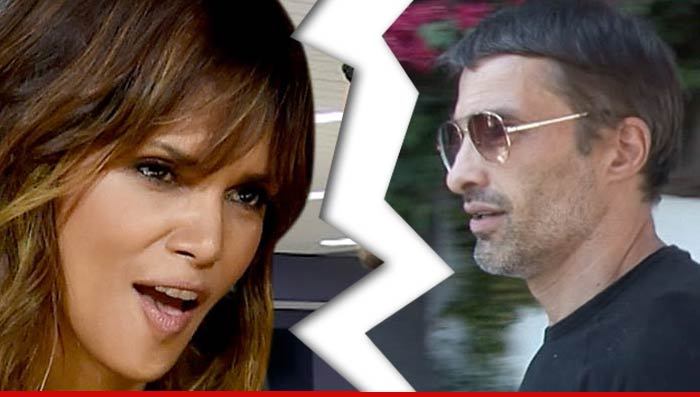 We’re told Olivier and Halle have not been getting along and last week was a breaking point, after an LAX employee sued Olivier for pushing a car seat into his chest. He also named Halle and we’re told she went nuclear on Olivier saying he’s responsible for her bad publicity. We’re told Halle and Olivier had a fundamental personality clash. She is “very difficult” and “goes nuts when she doesn’t get her way,” and Olivier has a temper, though not violent toward her. It was a bad combo.

Oliver (born January 12, 1966) and Halle (born August 14, 1966) both are very rich and famous but not cosmic conscious couples not know what a cosmic God/stars has in store for them. Both need a consultation with me in live person before take consider for their future in relationship, but they have to pay a price of their ignorance for a divorce lawyers etc..

Cosmically channeling, Aquarius and Cancer squaring signs don’t easily understand why the other acts the way it does, Olivier Martinez born with Venus conjunct Mars in Aquarius. Halle Berry born with Venus conjunct Mars in Cancer as result of what happened to Halle Berry, Olivier Martinez to divorce due to Mars (desire) and Venus (love) in relationships are not match as result of 2 years together.

Note Squaring signs often rub each other the wrong way.

Oliver born with Mars rules anger and temper in sudden release and shocking sign in Aquarius, Note Aquarius rules Aeronautics and LAX.  Olivier and Halle have not been getting along in the past week after they hit a ‘breaking point’. They had been fighting over his incident at LAX, where Olivier hit a man with a car seat.

However after her separation from her ex boyfriend Aubry, Halle met and fell for French actor Olivier Martinez while filming Dark Tide in South Africa due to Both have Sun opposite Mars on each other – strong sexual attraction!

Strong sexual attraction is come from Halle’s Sun Leo is opposite his Mars in Aquarius. Olivier’s Sun Capricorn is opposite her Mars in Cancer.

What’s more Olivier Martinez born with Dragon Tail (negative) in Sagittarius in 5th house (love) is right on her 5th house located in Sagittarius from Leo born as 1st house. This Dragon does NOT support anything foreign affairs or cultural background. Halle Berry is

half black, half white. She is still the only black woman to win an Oscar for Best Actress however This Dragon’s Tail is a sure red light warnings that will force him into divorce or unlucky in love that could have been avoided with diplomacy and patience.

If you don’t know your soul of cosmos or nobody told you who you are, where you come from, impossible allowing yourself to work in harmony with the stars / divine cosmos that lead to depression or suicide or divorce if taught him/her at home during beginning of time then he/she won’t happens in future. He/she can control his/her own stars / destiny / fate for his/her protection or pick one for right partner/marriage.