I hope the sport rules have changed due to ethic sensitivity issues raised with beginning of Jeremy Lin. The Universal Dragon Head in Sagittarius(learning/foreigner) & Tail in Gemini(communication/common sense)’s lesson learned is to exercise greater caution, to consider all the consequence of what we say about him. Let me explain about him and his fate.

Jeremy Shu-How Lin (born August 23, 1988) is an American professional basketball player with the New York Knicks of the National Basketball Association (NBA). After receiving no athletic scholarship offers out of high school and being undrafted out of college. In February 2012, he unexpectedly led a winning streak by New York while being promoted to the starting lineup due to last February 10, Lin scored a new career-high 38 points and had seven assists, leading the Knicks in their 92–85 victory over the Los Angeles Lakers. He outscored the Lakers’ Kobe Bryant, who had 34 points.

Why this young soul is so lucky and why is he so successful and popular during led a winning streak and scored a new career-high 38 points? Incidentally he born with the HIDDEN Dragon’s Head (luck/growth) in Scorpio (power/magnetic) and his Sun in hard-working Virgo making his work and service to the world. Virgo rules the planet of Mercury- rules speed, fast, service, hard-working, discipline and dedication, but To me, Leo/Virgo cusp, he born in August in the constellation of the Sun/Lion as fame, fortune, and power. He is now most famous Asian American NBA player. 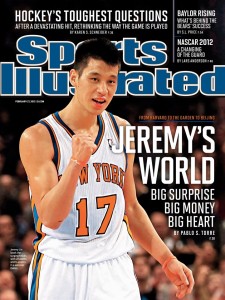 Note Jeremy was born with Mars (war/aggressive) in Aries(impulsive) conjunct the Universal Uranus(surprised) in Aries(individual) making his very successful leadership and new warrior. What sports talking heads, basketball recruiting analysis, journalism do not know is all communications and all moving parts of the human body and talking heads are rules the planet called Mercury. Currently the Tail(negative) of the Dragon is afflicting the sign of Gemini(funny jokes/class clown) making fun and racial slur of Jeremy Lin such used the term “chink in the armor” in reference to New York Knicks point guard Jeremy Lin, an Asian, while on air as a ESPNEWS anchor. He was suspended 30 days. Boxer Floyd Mayweather, Jr. wrote on his Twitter page, “Jeremy Lin is a good player but all the hype is because he’s Asian. Black players do what he does every night and don’t get the same praise.

Jeremy will gain more of the NBA exposure because his natal Uranus(surprised), Saturn(career), Moon(emotion) in Sagittarius (luck) conjunct the Universal Dragon also in Sagittarius(luck/published/marketing/journalism/learning/foreigner). The Associated Press called Lin “the most surprising story in the NBA”. Bloomberg News wrote that Lin “has already become the most famous Asian American NBA player”. He appeared on the cover of Sports Illustrated with the headline “Against All Odds”, which The New York Times called, “the greatest tribute”. He also made the cover of Time in Asia; Forbes wrote, “Congratulations Jeremy. You have now made the cover of Time the same number of times as Michael Jordan. Linsanity reigns on.” Lin’s story was also on the front-page of many Taipei newspapers. And more published over the internet and exposed by the newspapers over the world so now Linsanity is becoming a global phenomenon.