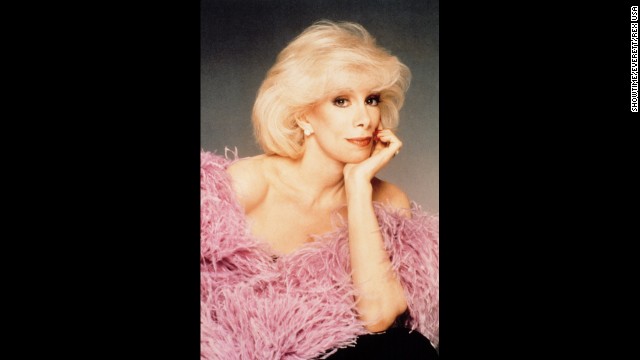 The comedian was quick-witted and sharp-tongued, known as the planet Mercury “Lord of communication” rules all form of transportation and all moving parts for examples- cars, trains, and planes. Mercury is also called “The Messenger of the Gods” and inherited a set of wings on each heal as to represent the speed and the long journey in front of the gifted the power of mental stimulation and movement. That’s the main reason why Joan Rivers to become as worldwide celebrity through her books, radio and television show not only that she has championed comic style and poking fun at celebrities, of course, loves to talk so much. As her soul purpose is keep to be curious, exchange her idea, read, write and expand her consciousness is cosmic God’s manifestation through the 3rd, and 6th houses, which is Gemini and Virgo. 3rd house rules communication, thinking abilities, exchange ideas, logical thinking, Intellectuality, and more. And 6th house rules service, health, and work, obviously, her resilience, perseverance, and strong work ethic. She found a way to continue working and being ‘relevant’ in the entertainment world. And also See how Joan Rivers plastic surgery face has changed over time because her Virgo tends to worry a lot, be very critical about her plastic surgery face. Virgo tends to be perfectionism, flawlessness and  high performance standards in work ethic.

Mercury controls the nervous system- the arms, hands, shoulders through her impulses move through her body’s movements, of course, restless.
UPDATED Doctor gave her medications to “kill” her. This is where everything went wrong under the Moon in Scorpio- Aug 31/Sept 1. But it said more studies will be needed to determine the cause and manner of her death, New York City medical examiner’s office spokeswoman Julie Bolcer said Friday.  More time to studies? sound bull**it. Doctors/pharmaceutical corporations have a huge responsible for her death, Of course, even with the best equipment however human error is always possible that what the health department will try to determine soon- Joan Rivers — Doctor Who Performed Throat Procedure Fired

Sun 16Gem59 (1) Mercurial Gemini make her to constant to read, write, talk, quick-witted as dual nature allows her to be everywhere at once.

Moon 17Sag32 (7) Sagittarius Moon in 7th house is the house dealing with the public so she easily blunt talk such abrupt and direct in address to individual or her audience where her emotional honesty means expressing her true feelings.

Mercury 29Gem20 (1) Mercurial Gemini make her to constant to read, write, talk, quick-witted as dual nature allows her to be everywhere at once.

Venus 29 Gem39 (1) Gemini Venus make her to constant to gossipy, playful and quick-witted related to arts, beauty and love as dual nature allows her to be everywhere at once.

Mars 15Vir49 (4)  Mars rules aggressive and dangerous where it located in health and work sign of Virgo that show her resilience, perseverance, and strong work ethic but often been criticized and stirred controversy.

Jupiter 14Vir30 (4) Very lucky Jupiter brought her to expand her on foreign ground, helping her to structure and organize her work.

Saturn 16Aqu14 (9) dignity Saturn rules career Aquarius rules original and television, obviously, after “shocking” opportunity to appear on the Carson “Tonight Show” as result that She was the first woman to host her own late night talk show on network television. She later went on to host a successful daytime show, The Joan Rivers Show from 1989 to 1993, which won her a Daytime Emmy for Outstanding Talk Show

Uranus 26Ari13 (11) Joan was born with an Aries rising (Self) and this eccentric planet added her direct approach to her friends and wishes. She loved to shock her friends.

Neptune 07Vir31 (4) illegal or legal drugs and chemicals that affect her life, I’m sure sleeping pills took her to sleep in order to get rest is very often happen in her lifetime.

Pluto 22Can02 (2) She is a part of generation of intensely emotional and domestically-inclined people and have a lot of possession and money at her home.

Ascendant 03Ari46 (11) Aries is the baby of the Zodiac, she is very competitive nature.

MNNode 02Pis31 (10) Joan Rivers was received by blessing the power of the stars to succeed in the arts and remain on top in her chosen career. But Pisces rules illegal or legal drugs and chemicals that affect her life.

MSNode 02Vir31 (4) The Tail of the dragon in cold, Virgo is one of the utmost cunning, critical and hard working you can get. Virgo is well known for his sarcasm and supreme organization. This Dragon makes it impossible for anyone to relax at home and bring all sorts of troubles to the family.

RULER OF CHART: Mars Indeed Joan Rivers was extremely competitive and all this Martian, aggressive intellectual power was focussed on her Aries rising or HERSELF! The shocking effect of Uranus, also on her rising, made her appear like an obnoxious warrior at heart to all the non-cosmic conscious people.

PLANETARY HOUR LORD: Sun- Our Sun is the king of the solar system and the Sun represents fame. She was indeed set to reach fame in this lifetime.