Mayan pyramid destroyed in Belize?  How incredibly unconscious! To them, it means nothing and not worthy of preservation for history with the ancient writings as a source of temple of the sun and moon based on Mayans calendar calculations. They were the masters in studying of the sun, moon and planets and most other resources related to the nature as a cycle of life.

Some private company operating in Belize, is clearly ignorant and lost in touch of spiritual  history,  like most of the atheists, agnostics and skeptics. They don’t give the chance in raising the awareness with celestial rules or 12 signs of zodiac of the universe. Ancient Mayan is a part of cosmic consciousness in their ancient history. Unfortunately, the importance of these sacred ruins are not respected. Much of its history was destroyed as a result of pillaging wars. As a result, the valuable information on the origins was lost due to power greedy souls.

These structures are protected by the government but as result of the law violation. Completely ignorant & arrogant in the name of money, it is a shame. Lack of policing and support to protect the ruins, but the greedy businessmen will continue to destroy for a personal profit. What Belize doesn’t realize is that the country can make long-term profit from the heritage tourism than they ever could get from a simple road project. It’s a shame that the developers in Belize choose to destroy the ancient structures, instead of research more about Mayan Pyramid/culture related to a variation of astrology. If you don’t know your ancient history/writing (applies to ancient cultures), you won’t know how your ancient origins get to where you are today nor in the future. 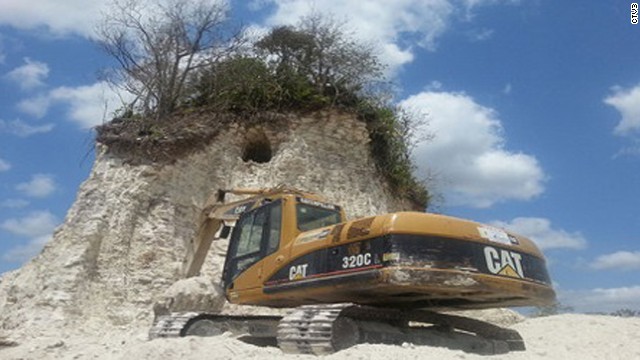 (CNN) — A Mayan pyramid that has stood for 2,300 years in Belize has been reduced to rubble, apparently to make fill for roads. Local media in the Central American country of 334,000 people report the temple at the Noh Mul site in northern Belize was largely torn down by backhoes and bulldozers last week.

“This is one of the worst that I have seen in my entire 25 years of archaeology in Belize,” John Morris, an archaeologist with the country’s Institute of Archaeology, told local channel 7NewsBelize. “We can’t salvage what has happened out here — it is an incredible display of ignorance.”

The institute’s director, Jaime Awe, called the destruction “one of the worse set of blows I have felt philosophically and professionally.” “What happened there is both deplorable and unforgivable,” Awe told News5 in Belize. Though the pyramid was grown over with trees and brush, there could be no mistaking what it was, Morris said.

“There is no way that one can say that they did not know. Even for you guys as laypeople can look and you’ll see the building,” 7NewsBelize quoted Morris as saying.

The pyramid was the center of a settlement of about 40,000 people and 81 buildings over 12 square miles, according to 7NewsBelize. It stood about 65 feet tall and was built around 250 B.C. with hand-cut limestone bricks, archaeologists said.

“The Mayas use good material to build their temples, and these temples are close to (the village of) Douglas so that means that they have to use less diesel, less wear and tear; they can do more trips per day, and at the end of the day they can make more money,” CTV3 quotes Briceno as saying. And there was plenty of the material in Noh Mul.

“Like a huge palace or building or a huge temple, it would have had many rooms in there, multilayered rooms so you have rooms for people living, and you would also had several tombs in there of the people who lived in this area here,” Morris told 7NewsBelize.

Awe said archaeologists would try to go through the rubble for artifacts. “I’m hoping that there will be bits and pieces that we can acquire from any kind of work that we do there. But to say that we can try to preserve the building anymore; that is impossible,” he told News5.

The mound sits on private land, and archaeologists said they would ask police to take action against both the landowner and contractor, according to reports.

Work at the site stopped when the archaeologists were alerted to it, but the site’s scientific value has been severely compromised, they said.

Its value will now be as something else, Moore told 7NewsBelize. “It’s a monument of ignorance, and unfortunately that’s the way it is,” he told the station. “Now we will probably have to look at this and say that it is a good example of what not to do.”