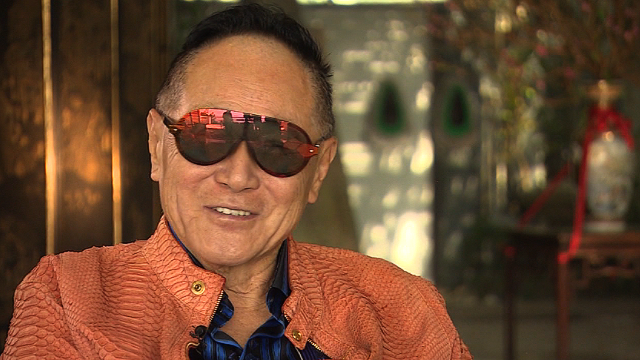 Hong Kong (CNN) — The flamboyant Hong Kong tycoon who offered millions of dollars to any man who could win the heart of his lesbian daughter says the proposal is now off the table. But he’s still refusing to welcome her long-term female partner into his family.Cecil Chao, a wealthy real estate developer, made headlines around the world in 2012 when he offered 500 million Hong Kong dollars (roughly $65 million) to any man who succeeded in marrying his daughter.

Honestly, it’s easier for me to teach astrological education to the children than to teach a closed-minded wealthy 77-year-old real estate developer, Cecil Chao who’s judging his own daughter through his five limited senses and cannot understand the nature of  homosexuality. I constantly spread my cosmic words to my friends of circle who are educated skeptics, atheists, agnostics men that guarantee bring better universal understanding to one another in order to bring a peace and harmony.

Her dad offered a huge gift to any man who would volunteer to marry his daughter. He thinks money will change her sexual preference is out of ignorance. His money is wasted, unfairly distributed for offering his stupid solution. Knowing that the cosmic truth about homosexuality is very important because of false accusations on daughter’s hormones or mental disorder is out of the order.

Sad fact, an international team of astronomers do not know how much importance to learn about the stars(12 zodiacal signs) Astronomers is similar to an old attitude with skeptical atheist followers related to their ridiculous discovery with the planet red-giant star and have no clue what they are doing. Their attitude of doubt were born out of ignorance till one day they realize the power of stars have produced by written in the constellations that has been lost. Only a minority is aware of the impact produced by twelve signs of the Zodiac. If true cosmic forces were really considered on a cosmic scale as useful, fictional cosmic such as black holes, dark matter, neutron stars(and pulsars), and any numbers of other junk creations of the standard theory would be ridiculous discovery at as they should be.

The cosmic truth is written in the constellations of the heaven that there are six masculine signs(Aries/Leo/Sagittarius/Gemini/Aquarius/Libra ) that harmonizes with the six feminine signs(Taurus/Virgo/Capricorn/Cancer/Scorpio/Pisces). That’s Universe principle, that rules yang/yin in order to understand dualistic nature of life: man/woman, front/back, up/down, black/white, yin/yang, positive/negative. The law of opposition is too obvious to be challenged or ignored on this question of sexual orientation.

When a woman is born with overload masculinity in the natal chart, she may attract to masculine aggressive/manly positions for example- firefighter, navy, gun maker/dealer, police officer or mechanical engineer.
When a man is born with overload femininity in your natal chart, he may attract to feminine gentle, easy jobs/activities for example- opera singer, artist, gardener, nurse, social worker or teacher..

Her daughter’s labeled “hormones or mental disorder” sexual orientation on surface, yet the direct answer is above the stars in the Universe (the stars/planets via natal charts).

CNN Poll: Majority say GOP out of touch with women

That’s why it’s important to launch new astrological education program in colleges,  in order to bring a better universal understanding for one another with all diversities and behaviors.  It’s time to stop to be bullied and the suicides due to sexual orientation at schools all over the US, lacking the chance to learn and understand the human psyche between the stars.

you’ve been lock out of heaven for too long or you better catch up this.