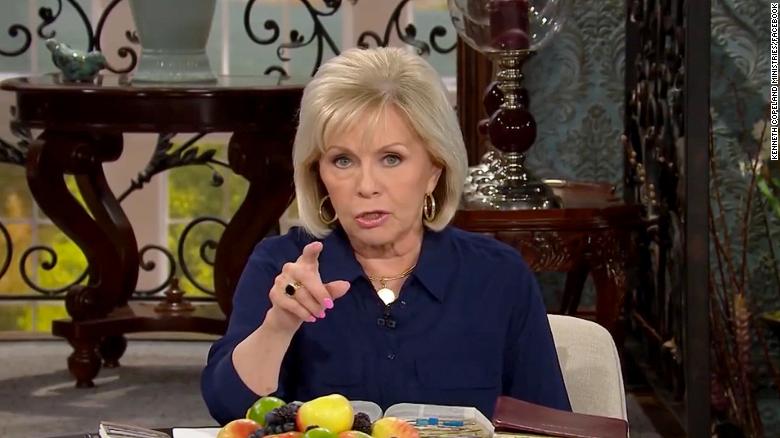 Televangelist with Trump ties: ‘Jesus himself gave us the flu shot …

“We don’t have a flu season and don’t receive it when somebody threatens you with ‘everybody is getting the flu,’ ” Copeland said in a video on her Facebook page.

She claimed that Jesus was himself protection from the flu and suggested that people avoid the virus by repeating the phrase, “I’ll never have the flu.” “We’ve got a duck season, a deer season, but we don’t have a flu season,” Gloria Copeland said.

Televangelist Gloria Copeland’s deceiving herself in your own cosmic ignorance. The cosmos is a real living animal, with a cosmic face, body and soul. That cosmic soul has a phenomenal consciousness that knows what human beings will experience in the future for better or worse.

Walk in peace knowing “We don’t have a flu season” when you see, hear and heed the signs with your new knowledge of the stars and live a safe and productive life. “And God created the stars and the heavens to be used as signs and for seasons, and for days, and years”.

The weather shifts, and it’s like astrological clockwork: Flu season/ winter sickness is based upon the return of the cold winter! People will get a cold or the flu when the seasons change. Same goes with when spring turns to hot summer, people will get infectious diseases from under the water or foods.

Certain people born with a rising, natal, moon or hidden dragon in Pisces or whatever it resides in own natal, easily attract disease, addictive personalities or infectious organisms. The change of seasons from summer to winter brings changes to your health. Be safe and prepared for your health in ahead of time.

“A physician without a knowledge of Astrology has no right to call himself a physician” – Hippocrates.

Hippocrates of Cos or Hippokrates of Kos, was an ancient Greek physician of the Age of Pericles, philosopher, naturalist, astrophile and is considered one of the most outstanding figures in the history of medicine.

Hippocrates is the Soul of Doctor as role is to divine the thoughts of the cosmos and apply them to the individual. Investigating your natal cosmic identifies and locate the nefarious planets by signs and houses is the first step to produce a personal powerful talisman or prescribe a natural potions to bring power to the weakest, prone to diseases organs.

Influenza, commonly known as “the flu” which it is symptoms of human influenza are described by Hippocrates roughly 2,400 years ago during Medical development.

1743, borrowed (during an outbreak of the disease in Europe), from Italian influenza “influenza, epidemic,” originally “visitation, influence of the stars,” from Medieval Latin influentia in the astrological sense and astral/ atmospheric influence. Medieval astrologers believed that an ethereal fluid flowed out from the stars or heavens to affect the people.

Televangelist Gloria Copeland says you don’t need flu shot if you have Jesus?

Hippocrates says if you suffer an headache or flu, fixing it is cosmic wisdom!

Pharmaceutical companies misled the public into a cycle of addiction. They are sued everyday because of the deadly products they manufacture and keep endlessly advertising on TV.

Facebook followers that there is no such thing as flu season, and that they don’t need to get a flu shot because “Jesus himself gave us the flu shot.”

“There shall be signs in the sun, the moon, and the stars.” – Jesus Christ, Luke 21:25. The Bible is filled with references to astrology. This is because astrology was widely accepted as truth in Biblical times.

The fact is Jesus was a Prophet and an Astrologer that became cosmic conscious and spoke to “His Father in the Heavens” because of the teachings of the “Three Wise ET’s Men” which Popular televangelist Gloria Copeland don’t speak the language of the stars.

Astrology is the mother of all sciences and this is why today science must check human body is connected with a zodiacal sign starting with Aries (the head) to Pisces (the feet.)