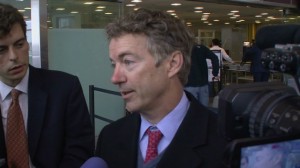 Randal Howard “Rand” Paul (born January 7, 1963) is the junior United States Senator for Kentucky. He is a member of the Republican Party. A member of the Tea Party movement, he describes himself as a “constitutional conservative” and a libertarian. Rand Paul’s Sun is located in the sign of Capricorn (politics/conservative) and the Moon in Aquarius(Universal) can either favorite or ejected him unless according his natal universal chart. so now good enough…

Today- Moon in Aquarius(Aeronautics/technology). Sen. Rand Paul refuses a pat-down at a security checkpoint. Note he born in Jan, 3, 1963, and also he was born with Saturn (fear) in Aquarius (aeronautics/technology) where his subconscious into his fears would be about boarding a plane and flying. There are no accident with his natal negative tail of the Dragon in Aquarius(aeronautics/technology/libertarian). He have to saving his ego is all he can redo then he was “ejected” from the screening area and told he may be subject to a “full body search” after he began talking on his phone. He was eventually rebooked on another Washington-bound flight, saying that time the screener did not go off when he went through it. why? his Mars(war) in Leo(fame/the stage/children/ego) and Moon(emotion) in Aries(aggressive) is simply rather do his own thing, and he let pride get in his way. The senator said that he didn’t think it was “appropriate” for him to have a pat-down, adding he should have been able to go through the scanner again. Why? Aries is ruled by Mars, was the god of war and aggression. Highly impatient, competitive, selfish and self-centered. It’s really wasted our tax dollars for him was “ejected” from the screening area and lost his flight tickets then He will spend his money to rebooked on another Washington-bound flight.

Rand Paul is the son of libertarian Texas Rep. Ron Paul, a candidate for the Republican presidential nomination. Ron Paul weighed in on the controversy Monday afternoon, calling it an example of a “police state in this country” that “is growing out of control.”

Ron Paul’s Mars (danger/drive) is located in the sign of Scorpio (Drama) and denotes a lot of nasty secret involving his close family members and the fight for control and powers between the brothers and his son.

(CNN) — Two women with untreatable eye diseases said they had dramatic improvements in their vision after injections of human embryonic stem cells, making it the first documented time these controversial cells have helped someone.

It’s PROOF that the science continues to progress, more discoveries where humanity’s progress in advanced scientific development in cell technology as Embryonic stem cells improve sight for legally blind woman due to Age of Aquarius(scientific/technology/progressive/future). Many unaware religious people’s so deceiving and expect Jesus will heal her, but guess what? many thousand over the world have no clue about the science of consciousness and the Age of Aquarius. Gee! It’s amazing to me that when I see people pray for deaf become hearing I never seen one deaf become hearing not even Benny Hinn’s crusade bull!!! Yes, Only future mad scientist can discovered for the best of the best scientific development and solution.

This page will be updated as the predictions unfold.

New Moon — January 23, 2012 in Aquarius: The New Moon will impact and grow in the revolutionary sign of Aquarius. you may see some surprising progressive everywhere. The “positive” moon period will bring more progressive time to set up any new project. The new two weeks are going to be full of surprises, and a good chance to move forward will be offered to those asking for progress. Try anything now, aim as high as you are capable; coincidence be will magical. Don’t waste this great opportunity with new moon. you may see surprising news involving explosions nature destructive forces at work.

Dad watches as daughter, 10, is killed by crocodile Shocking news?