Actor Sean Penn says the world won’t tolerate “ludicrous and archaic commitment to colonialist ideology” as he backs Argentina over Britain in Falklands’ row. Sean Penn is very open and has been active in supporting several political and social activism (including humanitarian work). I really admire this guy for his courage and honesty. Naturally, actor and global ambassador for wool Sean Penn has invited himself into the conflict. Well Sean is doing all he can do with what he was given by the planets and the stars at birth -“incredible investigator/master in communication/health conscious” usually found in all souls born with a Virgo Dragon’s Head. Indeed Virgo represents any form of work involving health, cleansing or purity. At the time, his humanitarian work in the aftermath of Hurricane Katrina and the 2010 Haiti earthquake was honored for all his humanitarian work. Sean Justin Penn (born August 17, 1960) had a conjunction of the Sun and Uranus(genius/future) in Leo – he was born to be leader, fame and light shone brightly (Leo) and the presence of Uranus typically bestows humanitarian and the ability to interact with others in a original way.

On Monday, Penn met with Argentine president Cristina Kirchner and rankled British feathers when he referred to the Islands by their preferred Argentine name, “the Malvinas Islands of Argentina.” He also criticized Britain’s claims of ownership as a

and, on Tuesday, accused Britain of neglecting “the great emotional sensitivity both of mothers and fathers in the United Kingdom and in Argentina” by sending Prince William into the disputed territory. 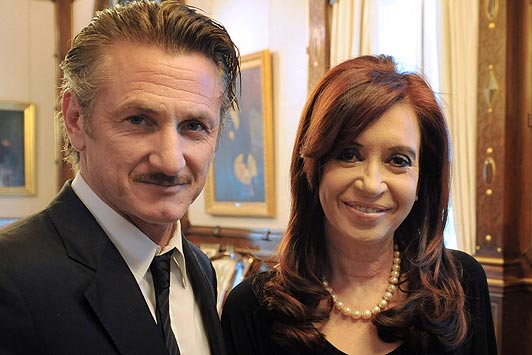 Note Britain and Argentina fought a 10-week war over the Falkland Islands in 1982 after Argentina invaded the South Atlantic islands, which the Argentines call Las Malvinas. So That’s why some Argentinians are upset that Prince William moved (troops) into position for military action into the Falkland Islands. Sean Penn feel must stop that situation and speak up his opinion when it comes to armed conflict due to Britain’s long history of colonialism, racism, and claims of cultural superiority. In addition, His natal Mars(aggressive) in Gemini(talkative/quick wit) and Jupiter in Sagittarius has a powerful need for intellectual and philosophical which conflicts with the Saturn/Capricorn England opposition’s pressure to tell to do what you are ordered, and Penn’s Mars/Jupiter tendency to be high-minded and vocal about his opinions where it reflected the planet of Uranus is in Aries now where it encourages us to fully expresses our own individual drive(Aries) for best lives.