Carla and I had been together in long distance for almost a year. obviously, we have a huge purpose for each other through celestial attraction based on universal magnets. This is no accident. We easily recognized each other through the stars and listen to the divine messages through our communication that keeps it exciting, fresh and humor. We keep in touch via a videophone like many people use the webcams, which means we keep in touch with the minutes of each others’ lives that keeps our long distance relationship going and close. At the beginning of my relationship, we’ve flew 2000 miles each way to visit each other, my subconscious wants her so badly and would do anything for her. With my Sagittarius rising, I often get restless and love to explore with freedom. I’m very curious about her. I want to know everything about her. I’m willing to take risk and adventure in love.  To seek the right one for me, yet I never expect anything perfect, all I want who is spiritual as an unique individual. My subconscious knew everyone is different based on experiences, background, education, character and more, but I found myself with her so easy to get along with and herself as spiritual being that makes our lives easier to clarify exactly what we want for each other.  so we decide to live together in Seattle to settle. 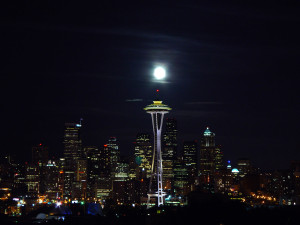 At the last minute, we were supposed to fly out at the end of April as planned, but went for an early flight.  Carla unconsciously picked that day under the full moon in Scorpio with Lunar Eclipse. I already knew this in advance and said nothing. So, we decided to book the flight on that day heading back to Seattle a few days before full moon appears for a safe plan in advance. That date of choice will not only impact my life, but to experience in reality to rely on lunar phrases.  if the majority of people who book the trip on a waxing moon, it may have some risks involved to trigger due to certain lunar energies. As my rule goes,  I am extra careful when the moon cross under the sign of Scorpio due to drama.  It’s either for better or for worse, And, sure enough,  a nasty incident did happen on our flight with Full moon in Scorpio. At first, we thought we would get seats together as assigned, but as standbys with a full flight. according to the flight ticket agent trying to find  two seats together for us, but no luck. Yet, our seats was on the same row across from each other (but the wrong row, flight attendant put us on). We somehow managed to  communicate across the aisle in between of passengers in the way. This man who sat besides my girlfriend, Carla, was rude to her the  first thing before departing. He mumbled telling her to hush up to quit her flying hands that bothered him. Her signing hands was in her limited space, not in this man’s face/space.  That discrimination got me really pissed off at that moron guy. Again, for the second time, he physically blocked with his arms/body to stop our conversation.  While in the air, again with the third round, he tried to block with his head, mumbling to her to stop.  Again for the fourth time, he acted more disrespectful and rude to her. That’s it. I have had enough of this crap. I got angrily gestured with him to quit his nasty attitude that resulted him to press Flight attendant button as a crybaby grumpy man.  Good thing, the flight attendant was puzzled with his poor behavior, complaining over this small stupid thing. She ordered him to switch the seats. That behavior of his is no accident due to Scorpio Moon to trigger and unleash his intense emotion on someone else. When Carla knew how i would react, she didn’t want me to continue to blast him, wanting me to just back off and ignore him. For your record, Pluto is a control freak, nasty and dramatic when there are bad aspects in his natal chart is for sure enough to show his true colors.

On the positive side in the sky, the supportive flight attendants gave each of us a glass of  white wine that calmed us. And at the same time, to view a large beautiful orange Lunar Eclipse in the air from our airplane windows.

At the point, we finally arrived, deplaned and walked through the terminal, and to my  surprise, to spot this new surreal art with zodiac symbols on the wall at SeaTac Airport(Seattle). And within a deep subconscious knowing that this artist has the genius trait of Aquarius somewhere in his natal chart and sure enough he’s attracted to astrology. why? He was born with the head and tail of the Dragon in the Leo/Aquarius axis. Leo rules creativity, love and art while Aquarius rules astrology, independent and eccentric. 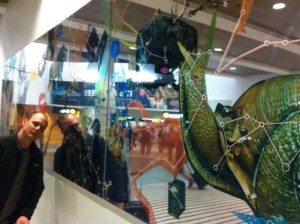 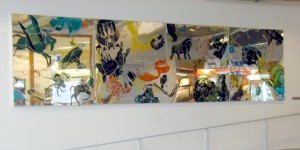 Robert Rauschenberg (October 22, 1925 – May 12, 2008) was an American painter and graphic artist whose early works anticipated the pop art movement. You can google him up and learn more about his life, his background, his art work credit, etc. Truly amazing, indeed!

Of course, this Moon in Scorpio is represented of death and rebirth- destruction and transformation which means that everything must renew and reform from the old past life, old pattern, in order to accomplish for spiritual growth in life, according to the natural order of the universal laws to keep everything in the universe to revolve nonstop.

I was born in February as 1st house- Aquarius, in this current  Universal Dragon that takes a trip through the sign of Taurus in action which happens to be in my 4th house of home, personal living, security where it shifts to impact on my home area that forces me to relocate to Seattle from my old home in D.C. of 8 years. Right now, I’m still unpacking stuff out of my baggages,  searching for a job, shopping for a new car and more to go. I really enjoy living with Carla and her three dogs so far. so now I’m ready to move on and start work on my newsletters for May horoscope and Moon phases in ahead of time. As the rule, this is a life changing experience and knowing that Carla is Cancer, also expect in facing the shift  in the energies under the stars.