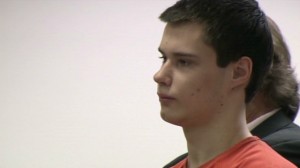 (CNN) — A federal judge sentenced Colton Harris-Moore, whom authorities dubbed the Barefoot Bandit, to six-and-a-half years in prison on Friday for an infamous string of thefts and burglaries. Harris-Moore pleaded guilty last year to federal charges stealing an airplane, piloting it without a license, burglarizing a bank and possessing a firearm as a fugitive.

Britt Rebuttal: Colton Harris-Moore (born March 22, 1991) is a criminal and former fugitive from Camano Island, Washington. He was charged with the thefts of small aircraft, a boat, and two cars and in the burglaries of at least 100 private residences in various locations around the Pacific Northwest of the United States and Canada. Note He born with Moon (emotional response to life) in Gemini(thieves) and Mars(aggressive) in Gemini(thieves) in 4th house(home/residences) Why? Mercury is infamous for Lord of the Thieves. Why? It rules the arms, fingered, fast, speed, quick in and transportation. Sad reality, Law Enforcement officers have no clue why he’s criminal, fugitive and his family background with behind his natal universal where it can reveal real color of him. gee.. It’s time to learn Science Outside the Box and update their knowledge of the solar system effectiveness upon him and future criminal such as same cases with O.J. Simpson and Casey Anthony as Gemini *Thieve, Lair and Dual.

The 20-year-old gained notoriety — including 50,000 Facebook fans and a movie deal — while leading authorities on a two-year manhunt while eluding capture in stolen boats, cars and planes, often while barefoot, authorities said. He once left chalk outlines of bare footprints at one crime scene and was finally arrested in July 2010 after he was captured in the Bahamas. Harris-Moore pleaded guilty last year to federal charges stealing an airplane, piloting it without a license, burglarizing a bank and possessing a firearm as a fugitive.He also pleaded guilty in December to 33 state charges related to residential burglaries, identity thefts, a firearm theft, a car theft, attempting to elude a police vehicle and other offenses, according to court documents. He was sentenced to seven years and three months in prison on those charges.

Britt Rebuttal: Most time, his burglaries come from 100 private residences due to negative Dragon’s Tail in Cancer(home/residences) where it’s location of Moon(need/security/emotion/home) in the hidden house of Leo(love/romance/children/the stage/fame) and There are no accident wit his cases become the famous criminal- including 50,000 Facebook fans and a movie deal/book deal too.

Note He has been diagnosed with depression(Saturn), ADD(Mercury) and intermittent explosive disorder(Mars). Psychiatrist is similar with all unconscious scientists have no clue about the dynamics of our solar system where it’s directed his health issues. they can do is give them a pills and kill their health.