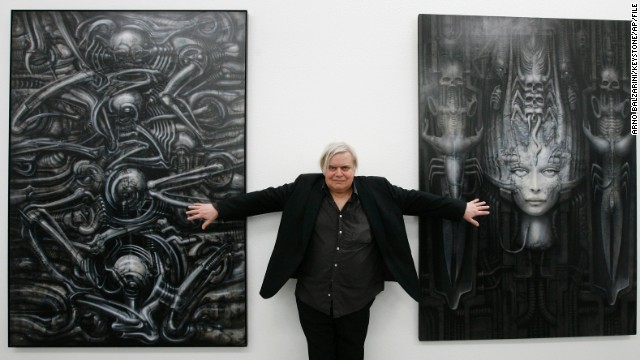 Hans Rudolf Giger (5 February 1940 – 12 May 2014) was a Swiss  surrealist painter, sculptor and set designer. He was part of the special effects team that won an Academy Award for Best Achievement for Visual Effects for their design work on the film Alien. He was named on Science Fiction and Fantasy Hall of Fame in 2013

Why he was chosen to be on Science Fiction and Fantasy Hall of Fame in 2013? Because his artwork shine so brightly? Maybe. Why is it that everybody was inspired by his artwork? First thing, I noticed through his artwork portfolio, instantly visualized the symbols in the Planet of Uranus,  a mental image of Aquarius. Aquarius energy is found related to the computers, televisions, radios, intelligence, UFO, science and technology. Aquarius also rules science fiction and fantasy, futuristic, also Japan is an Aquarius country.  Uranus rules unique, progressive, futuristic sign of Aquarius and controlled by the month of February. He was born with his Sun (soul’s purpose) in the freedom/intellectual-oriented Sign of Aquarius. Following by Astro-Psychology method, the 3rd house rules thinking process so both born in the month of February becomes a Aries.

This is a manifestation of Aquarius in this sign that influenced Giger by his many filmwork in American, European and Japanese horror films-  Dune, Alien, Aliens, Alien 3, Alien: Resurrection, Poltergeist II: The Other Side, Killer Condom, Species, Batman Forever, Future-Kill, Tokyo: The Last Megalopolis, Prometheus.

H. R. Giger’s original mind was governing in the power of his natal chart. He was determined to create his original projects which was his purpose to outlet his creativity mental process. His natal Uranus in Taurus. Uranus rules unique, progressive, futuristic sign of Aquarius where it located in love, beauty, art, painting, sculpting, and designing sign of Taurus. And with the planet Venus in Pisces. Venus rules beauty and art. Pisces rules art, color, painting, creating chaos, disorder, and confusion including surreal and dream is exactly opposite direct to the surreal and dream Planet Neptune in Virgo. Virgo rules great details and perfectionism however the planets, Saturn(depression/career), Mars(drive), Jupiter(lucky) are located in 3rd house of thinking process that affect his artworks.

His Mars in Aries runs blood through his veins! Mars is one of his dominant planets that provided him a strong drive. Also,  Aries rules a very self-obsessed with a manifestation of human bodies and machines in a cold interconnected relationship, he described it as “biomechanical” as new “Me”.

H. R. Giger’s natal chart showed a lack of emotion in him, however, he was born with his Moon in Capricorn- (cold/critical/status quo) that became him as a great architect and builder. He was an introvert. He was a down-to-earth, practical, methodical and organized with his natural gifts with great details and excellent observation skills. His Moon rules emotion response through his work as a great manipulative artist.

His Pluto in Leo had his pride and creative power, that drew everybody to get inspired with his artwork. Pluto is the Lord of the Underworld which was opposing his Sun in Aquarius in his natal chart. That resulted him to get accepted to be on Science Fiction and Fantasy Hall of Fame. However,  his 10th house(planet Saturn) seem to be mostly part of his dominant planet because of his serious concentration on his work. In physical astrology, Saturn rules the skin, bones and knees.  His expression in art created a Great Malefic in a way of superiority that may be real manfestion.

Here are more details about his natal chart as a well-known artist.

Moon 13Cap53 (12) detriment cold/critical/hardwork) that made him as a great architect and builder. Even more interesting is that incredible thing had happened in his 12th house of subconscious motivation, “secret” that ruled by the sign of Pisces (deception-behind the art scene), dream and fantasy or science fiction. That explained of his suffer from night terrors. Also, his paintings were all to some extent inspired by his experiences with his particular sleep disorder(Pisces rules sleep/dream).

Mercury 19Aqu02 (1) exalted- Mercury rules the mind and the critical thinking with the power of Aquarius. Aquarius rules the eccentric and inventive as well as UFO phenomenon theme.

Mars 22Ari08 (3) Dignity- Mars provided Giger with the cardinal power and the goal-oriented and the desire to achieve independently. Aries also rules self absorbed.

Jupiter 06Ari49 (3) Jupiter, a very lucky planet,  rules the publishing,  in the sign of Aries (desire to achieve). Thus his artwork in publishing can be found in his work of the films, recording artists, interior decoration and computer games.

Uranus 18Tau01 (4) Uranus rules shock, weird, surprise and unexpected where it located in painting, sculpture, and craftsmanship sign of Taurus.

Pluto 01Leo29 (7) Pluto in Leo made him as a pride with creative power where it inspired and drew the audience. Leo enjoys to play and with passion. Dragon Tail 23Ari40 (3) Born with Aries (independent) Dragon, that resided in Giger’s due to his past lives coming from Mars (warrior/leader). By nature, he was a very competitive person. Interestingly enough, Germany is also a country ruled by Mars (planet of war). He created new alien warrior and Uranuian machines  Aries rules self-centered and self-obsessed.

If You Love This Cosmic Newsletter, Please Donate to- bluneborg@gmail.com Please pass this along to your friends and family. Thank you very much