In the medical aspect of astrology, Pisces is the last sign of the Zodiac, traditionally, rules the feet. Pisces governs the asylum, hospital, church and prison. It’s also a mute energy, it has no voice of its own. Submissive by nature, Pope makes a symbolic gesture of humility and goodwill, all people can do is to praise and make positive statements. Perhaps some see it as a honor, however it is a tradition dating back to what Jesus did the washing of his twelve apostles feet during the Last Supper. Note the twelve Apostles were fishermen, the symbol of the fish has also been used to symbolize Pisces.
Understanding, the Catholic church has since controlled with narration from the time Francis was selected, and have managed the news in cycle repeating itself accordingly during Age of Pisces…which I would notice that most advanced spiritual people have failed miserably at this with Francis; thus his inability to read the signs above the stars in regarding to such scandals of the priest abuse or North Korea Crisis, and such.
Where are his divine values, divine security in brotherhood, unity and integrity? Why is that, is because he’s following the archaic religious materials, or to choose and follow the divine celestial’s signs above the stars? 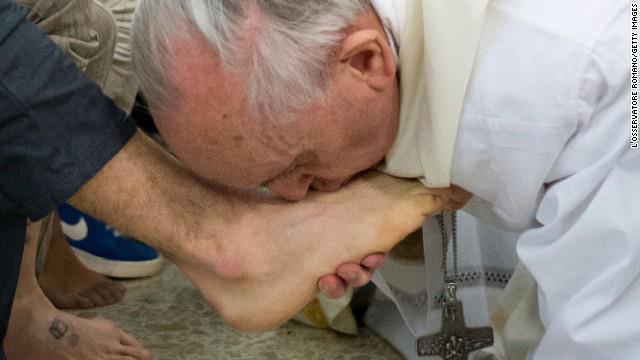 (CNN) — Pope Francis washed the feet of 12 prisoners, including young women, at a youth detention center in Rome as part of a Holy Thursday Mass ahead of Easter.

The media keeps repeating about how “humble” this Pope is, and at the end of the day, feet washing, public transportation, and forgoing palatial residences are largely symbolic gestures with no real impact on anyone’s lives. That is not act of faith, it is the act of deceiving for the profit to himself. These “sacrifices” don’t actually help anyone but the Pope himself for his reputation. The church is the richest organization in the world which also is the biggest child-molesting ring in history, hidden by the priests because they are worried about their flow of cash.

Note, I’m one of many thousand children who are ADD sufferers, with very strong curiosity, which can be a mental challenge in school, and when in church as a kid, didn’t follow their rules, behaved as a mischievous rebel. My subconscious told me something off going on behind the church teachings. My Dragon Head(lucky/growth) in Libra have a strong sense of motivation by the justice principle being able to catch something wrong with their archaic religious teaching system in conflict with the issues, and at the same time, my Dragon Tail in Aries brings me a passion of self-discovery which is so important to have. If I do nothing with ‘spiritual food’, the worst thing could only happen to me. Seriously, those new generations really need real ‘spiritual food’ to find their celestial identities to understand themselves better, they are different than their own parents, teachers, co-worker, boss, friends, as much as yours today. Simply seek the light of God’s face(zodiac) to find your identities. God gave you the stars to interpret, so you can find out about yourself. That is your true celestial identity. Your sign is reflecting God’s light, not just to wash a criminal’s feet as an act of faith. That is so primitive ritual thing,or could be even a superstition practice from the Middle Ages. Bottom line, It’s all about seeking the light of twelve signs of zodiac, essential part of your spiritual lives.

Lastly, Pope Francis washed the feet of 12 prisoners, including women and Muslims. Why 12? of course, 12 signs of the zodiac, 12 apostles, 12 hours. 12 months. 12 tribes of Israel. No wonder the fruit from the tree of knowledge was forbidden so that you are not allowed to be taught with the truth of astrology, every Sunday at church. Everything you see in the photo is in hidden symbolism.