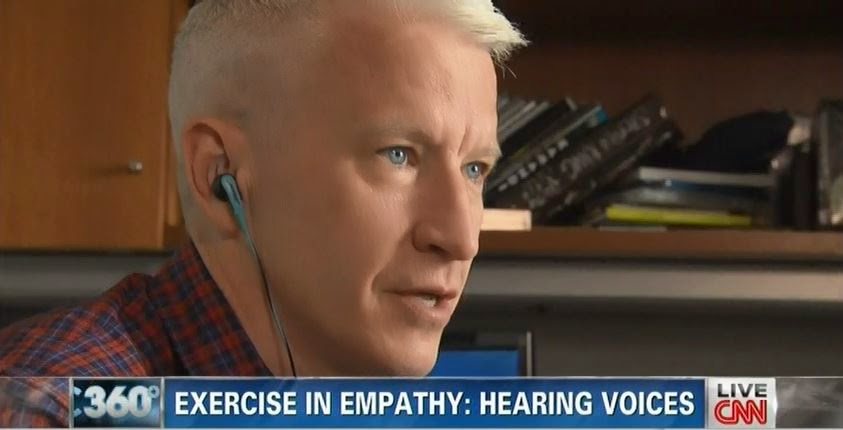 Mental illness often makes headlines after tragedies like last week’s deadly shooting at Seattle Pacific University. A number of mental illnesses, including schizophrenia, can cause auditory hallucinations. It’s important to know that only a tiny number of people who hear voices engage in violence of any kind. Anderson took part in an experiment to help people understand how others live with mental illness experience everyday. Anderson wore headphones that simulate hearing voices while trying to do everything from puzzles to simply interacting with people in the street.

Clinical psychologist Pat Deegan designed the experiment. She was diagnosed with schizophrenia as a teenager.

In the wake of the shooting at Seattle Pacific University – in which the suspect heard voices in his head telling him to kill people. Yet, lacking his full DOB, I’m unable to expose his natal chart. However, I decided to write up about John Forbes Nash, Jr as a good example of schizophrenia. I wish Pat Deegan, psychologist and Anderson Cooper could read my cosmic article to able help them to understand with those who live with “mental illness” affected by their natal charts. If you’re not familiar about John Nash’s true life story or a person with “schizophrenia”, I suggest you to watch the movie, “A Beautiful Mind,” directed by Ron Howard and starred Russell Crowe, nominated for the best film of 2001.

John Forbes Nash, Jr. (born on June 13, 1928), an American mathematician whose works in game theory, differential geometry, and partial differential equations have provided insight into the factors that govern chance and events inside complex systems in daily life. Gemini rules the planet Mercury and controlled the month of June.

This is purpose to document with common disorders in astrology,  in order to indicate the findings in natal charts such as “schizophrenic disorder”. This is Astro-Psychology method of a  different way of approach that provides you direct answers.

John Forbes Nash, Jr was designed as a Gemini exposed by the stars divination. Gemini rules natural intelligent, curiosity and communication, ruled by the planet of Mercury. “Used headphones that simulate hearing voices” is exactly the same description as the Planet Mercury because it rules mental stimulation and communication which easily is distracted and instability because it also rules the nervous system in the body. This is common examples of mental exercises by doing crossword puzzles and playing chess or mathematics to develop the power of the mental stimulation. these are one examples of the cosmic energies within have led John Nash to these make-believe, destructive, unconscious, delusions thought processes- Neptune (confusion) is the planet of deception, dream, paranoia, often plays part of all mental disorders.

Note his Planet Neptune resides in natal chart where it is located in 3rd house of mental process. His wife later described his behavior as erratic, as he began speaking of fictional characters like ‘Charles Herman’ and ‘William Parcher’ who were putting him in danger. Nash seemed to believe that all men who wore red ties were part of a communist conspiracy against him. Nash mailed letters to embassies in Washington, D.C., declaring that they were establishing a government.

‘Charles Herman and William Parcher’- Two imaginary persons in his mind reflects as a dual mind(gemini). The planet Neptune in 3rd house rules the planet Mercury and dual constellation of Gemini. Dual means double life. He mailed letters to embassies in DC(Gemini rules writing/letter/communication) is exactly the opposite as direct to the planet Saturn (fear/career/government) in Sagittarius (publishing/higher education)

His natal Sun in Gemini is opposite as direct to the planet Saturn(fear/career/government) in Sagittarius(books/bible/publishing/higher education) and Dragon Tail in Sagittarius( books/bible/publishing/higher education). that’s why his home was filled of books, including a series of  encyclopedia in which he was more interested than playing with other kids. His mom encouraged his studies, but his teachers labeled him as “backwards” due to his lack of social skills.

His natal Mercury(mind) conjuncts Pluto(power) in Cancer (watery signs). One of the introverted signs that is ruled by the water element. Cancer rules residence, domestic affairs, home, family and private life. He was called by his family, was a solitary and introverted little boy, though his parents were loving and attentive.  However, his original mind, aka “beautiful mind” found in his natal chart with emotional response planet Moon, plus the driven passion planet Mars conjunct the scientific genius planet Uranus in Aries. Note,  Aries also rules mind which it manifests him being so progressive, and determined, and original in advanced mathematics.

if you have a question about schizophrenic related to your friends or family, please email me with DOB and i will be happy to find it for you. Please pass it on.