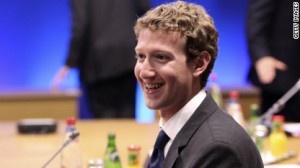 NEW YORK (CNNMoney) — At age 27, Mark Zuckerberg is about to officially become a paper billionaire. In the IPO paperwork Facebook filed Wednesday, the company reported that its founder and CEO owns more than a quarter of the company. Zuckerberg holds roughly 534 million shares.

Mark Elliot Zuckerberg (born May 14, 1984) is an American computer programmer and Internet entrepreneur. He is best known for co-creating the social networking site Facebook.

WHY DID HE BECOME SO SUCCESSFUL IN HIS LIFE?

Sun(fame) in Taurus(wealth/self esteem/bank/switzerland/financial) in 1st house of drive to achieve lead him to reach his goals.

Mercury (mind) in Aries (leader/aggressive) in 12 house of subconscious/secret where he start get people to join Facebook. Once at college, Zuckerberg’s Facebook started off as just a “Harvard thing” until Zuckerberg decided to spread it to other schools, enlisting the help of roommate Dustin Moskovitz. They first started it at Stanford, Dartmouth, Columbia, New York University, Cornell, Penn, Brown, and Yale, and then at other schools that had social contacts with Harvard

Dragon Head in Gemini(mind/communication/chatter box) in 2nd house of wealth/self esteem/bank/switzerland/enough to make him one of the 50 richest people on the planet, by Forbes‘ calculation.

in 8th house of money/wealth/financial.